This, is a galaxy: 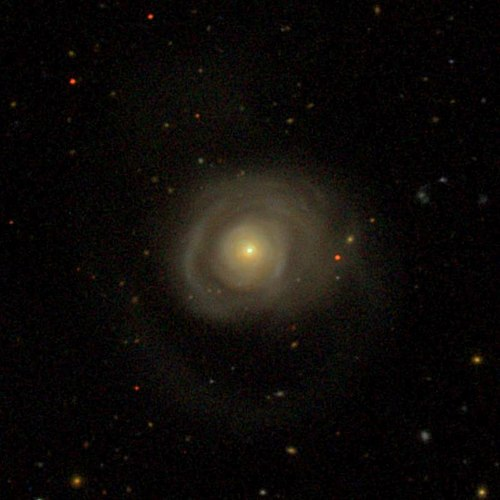 Its name is NGC 5548 (NGC referring to the fact that it is a galaxy). It looks very much like the milky way, with similar spiral arms around a glowing core. However, we do note that these spirals appear much more compact than our own. The tidal disruptions at the tips of the spirals also indicate recent (on cosmological scales) inter-galactical interaction with another galaxy, perhaps even a merger.

So it would appear that NGC 5548 is quite a common specimen in the population of galaxies, apart from its unusually bright core that outshines its spiral arms.

At the center of the bright core is a supermassive blackhole of approximately . As we speak, it is devouring gases in the accretion disk surrounding it on its equatorial plane. Friction and viscos effects allow heat to be radiated in the form of electromagnetic radiation. This radiation peaks usually in the X-ray region. NGC 5548 was one of the earliest galaxies to be identified as Active Galactic Nuclei, among 12 others listed by American astronomer Carl Seyfert. In tribute to him, the class of active galactic nuclei are named the Seyfert Galaxies, and is separated into two distinct classes. Seyfert I galaxies, in particular, are known for their extremely broad emission lines.

In preschool we have learnt that the spectrum of atoms are unique and specific to each type of atom. Theoretically they should be a single line defined exactly at a certain wavelength. Quantum mechanics tells us you can never measure a quantity to the arbitrary precision, so naturally the emission lines have widths of about nm. However, the emission lines in NGC 5548 is clearly not so: it would appear they are much, much wider. The three Balmer emission lines labeled with colored lines （ ）are a clear example of this.

(As a reminder, this spectrum is the observed spectrum-the galaxy itself has a cosmological redshift of z = 0.016, and so the entire spectrum should be shifted by a factor of in the lab frame for further analysis. )

Let's pick a broad emission line to better see its details. As the line has many other emission lines in its vicinity, we shall pick for further analysis. It has a wavelength of 486nm in the lab.

First, let us appreciate the width of the spectrum: compare the line to the pair of emission lines to its right. It is immediately evident why we refer to it as the "broad-line"

These, are in fact a contrast between the narrow lines and the broad lines. Their observance can be explained by the Doppler Effect

Imagine, for a moment, that we are directly facing an active galactic nucleus like in the diagram. The surrounding gas orbits the central blackhole on a Keplerian orbit. At any instance, there would be a part that has velocity pointing away from us. This would mean that the emission lines produced by that part would be redshifted. Vice versa, on the opposite part of the orbit the molecules are moving towards us-hence its wavelength is blueshifted. As the orbit is filled with emitters, and there are many other orbits like this one, we can sum up all the contributions to get the final broad-line profile.

There are two specific regions around the active galactic nuclei that are directly responsible for the formation of narrow lines and broad lines: the Narrow Line Region (NLR) and Broad Line Region (BLR). In the BLR, the emitters are close to the blackhole, so their velocities are much greater. The broad lines of NGC 5548 are approximately 5900km/s in width, while its narrow lines are much smaller at 400km/s. As hydrogen is abundant in both the NLR and BLR, what we see in NGC 5548 is the superposition of the narrow hydrogen line and the broad hydrogen line-this explains the small spike on top of the broad emission line: it is the narrow line.